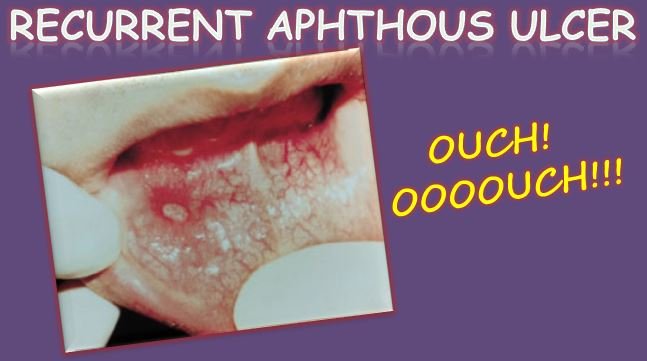 Ulcers are described as well-circumscribed, often depressed lesions with an epithelial defect that is covered by a fibrin clot, causing a yellow-white appearance. A good example is an aphthous ulcer. A painful oral aphthous ulcer, or more commonly known by aphthae or canker sores are being routinely appreciated by both the medical and the dental professionals for over thousands of years in otherwise healthy individual. The term aphthous is a derivation of Greek word aphthi, meaning “to set on fire” or “to inflame”. It is believed that Hippocrates first used this term to describe the pain associated with the common disorder of mouth during his time (likely, aphthous stomatitis).

Recurrent aphthous stomatitis (RAS) is characterized by painful recurring round to ovoid ulcers and is considered to be the most common oral mucosal conditions, but it’s unknown aetiology makes the diagnosis and management of these lesions a common problem in general as well as speciality dental practice. RAS commonly presents as painful ulcers of labial and buccal mucosa and tongue, rarely occurs on heavily keratinized mucosa as of palate and gingiva. The oral lesions of hematologic deficiencies, immune disorders, and connective tissue diseases are clinically similar to RAS, making it a diagnosis of exclusion. It becomes the responsibility of practitioner dealing with oral lesions to distinguish systemic disease from the localized RAS.

Aphthous ulcers affect upto 20-25% of the general population, the variation in incidence rate is from 5-50% depending on the ethnic and socio-economic group. Occurrence of aphthous ulcer starts from about 5 years of age and continues throughout life with a peak incidence seen in between 10-19 years of age. It is seen that children belonging to high socio-economic status have five times more chances of having RAS. The prevalence of RAS is also being affected by activities of daily living.

RAS is classified according to the clinical characteristics, i.e., minor, major and herpetiform ulcers.

The characteristic features of three types of aphthae

The exact aetiology of RAS is unknown, but several of the factors like local, systemic, immunologic, genetic, allergic, nutritional, and microbial factors have been proposed to be the causative agent of RAS.

Trauma (not all) to the oral mucosa induces edema, early cellular inflammation associated with an increased viscosity of the oral submucosal extracellular matrix, which ultimately provokes aphthous ulcer. This is most likely seen in denture wearers. On the other hand, chronic smokers exposing their oral mucosa with nicotine shows negative association with RAS. This proves that individuals with hereditary predilection to the disease only gets affected with local trauma and develops RAS.

Changes in salivary pH that affects the local properties of saliva or stress-induced rise in salivary cortisol levels have been to be associated with RAS. In the absence of direct link between salivary gland dysfunction and RAS, xerostomia and RAS have synergistic effect on the symptoms experienced by the patient.

Recurrent aphthous stomatitis (RAS) was once assumed to be a form of recurrent herpes simplex virus (HSV) infection. The studies done in this field for the past 40 years or so confirmed a distinction between RAS and HSV infected ulcers. “Herpes” is known to be sexually transmitted disease among the laymen and hence, is an anxiety producing word and should be better avoided when it does not apply. According to some authors, reactivation of varicella zoster virus or human cytomegalovirus is found to be associated with frequent recurrence of aphthous ulcers, confirmed by biopsy.

Helicobacter pylori, a common risk factor for gastric and duodenal ulcers is also proposed to be a causative agent in developing RAS. A hypothesis stating the involvement of oral streptococci especially Streptococcus sanguis has been proposed. According to it, damage to the oral mucosa occurs because of the T-cell mediated immune response induced by cross-reaction of the oral microbial agent with the mitochondrial heat-shock proteins of oral keratinocytes. Epstein Barr virus and lactobacilli are also been advocated to be associated with aphthous stomatitis.

Several systemic diseases have oral ulcerations as one of the symptom that resemble RAS. The most common Behcet’s syndrome, is one of the multisystem disorder presented with recurring oral ulcers, recurring genital ulcers, and eye lesions. Immune complexes induced by T-lymphocytes and plasma cells results in abnormal inflammatory response in Behcet’s syndrome. A high titer of anti-Saccharomyces cerevisiae antibodies (ASCA) in Behcet’s syndrome helps to distinguish it from recurrent aphthous stomatitis. But, this distinction is not as simple to be reported as it is seen. This is because about 70% of the patients with Crohn’s disease and 15% of patients with ulcerative colitis are presented with ASCA and associated with recurrent aphthous stomatitis.

MAGIC (mouth and genital ulcers with inflamed cartilage) syndrome with relapsing polychondritis is a variant of Behcet’s syndrome. The ulcers of Crohn’s disease have indurated borders and are granulomatous in nature, histologically. In AIDS patients, RAS seems to occur lately only after the CD4+ lymphocyte count falls below 100 cells/mm3. The aphthous ulcers in HIV positive individuals occur more frequently, last longer and leads to more painful symptoms as compared to a healthy individual. A rare disorder of childhood, i.e., cyclic neutropenia is associated with recurring oral ulcers when the neutrophil count is severely depressed. Marshall’s syndrome or PFAPA (periodic fever, aphthous stomatitis, pharyngitis, cervical adenitis) has presentation similar to those of cyclic neutropenia and is presented with oral ulcers indistinguishable from the RAS.

About 5-10% of the RAS patients have been highlighted to be suffering from nutritional deficiencies with lowered levels of serum iron levels, folate, zinc, or vitamin B1, B2, B6, and B12. Malabsorption syndrome or gluten sensitivity with or without enteropathy may be secondarily associated with nutritional deficiency causing the oral ulcers to develop.

The most underlying cause of RAS to develop is stated under hereditary and genetic factors. It has been found that children with RAS positive parents are 90% more susceptible of developing aphthous ulcers. Genetically specifically HLAs including HLA-A2, HLA-B5, HLA-B12, HLA-B44, HLA-B51, HLA-B52, HLA-DR2, HLA-DR7, HLA-DQ series are found to be linked with the development of aphthous ulcers.

Hypersensitivity to certain food substances, oral microbes such as Streptococcus sanguis, and microbial heat shock proteins have been suggestive as possible causative factor for RAS. Some individuals allergic to food items like milk, cheese, wheat are relieved of the symptoms after eliminating these products from their diet suggesting a close association between allergy to food substances and development of aphthous ulcers.

Sodium lauryl sulphate (SLS), a denaturing substances found in toothpastes has also been found to be one of causes of RAS. The hypothesis states that SLS erodes the oral mucin layer exposing the underlying epithelium and thus, makes the individual more susceptible to RAS. This theory is, however questionable as no viable difference is seen in the development of aphthous ulcers when SLS-free toothpastes are used.

A relationship between cytotoxicity of T-lymphoctes to oral epithelium, antibody-dependent cell-mediated cytotoxicity and defective lymphocyte subpopulation and the development of recurrent aphthous stomatitis have been proposed in several of the theories in the past. One of the theory had suggested that the deposition of immune complexes within the oral epithelium causes damage to the mucosa resulting in ulcers. Also, some of the recent studies have suggested an association between severity of symptoms of RAS and abnormal proportions of CD4+ and CD8+ cells, alteration of CD4:CD8 ratio, and elevated levels of interleukin 2, interferon gamma, and tumor necrosing factor-∞ (TNF-∞) mRNA in RAS lesions.

An association  between RAS and stress and psychologic imbalance has been proposed. RAS finds to have an increased frequency in menstruating females. The stress in the life of a student is a precipitating factor in the development of RAS.

The blood levels of antioxidants such as erythrocyte superoxide dismutase and catalase seems to be higher in cases of RAS and Behcet’s syndrome, but their role in causing RAS is yet to be developed. Also, a significant association between the RAS and use of non-steroidal anti-inflammatory drugs (NSAIDS) and β-blockers has been found.

A prodromal burning sensation lasting for about 2-48 hours is experienced by the patients before developing aphthae. The ulcers are round with well-defined erythematous margins and a shallow ulcerated center covered with fibrinous pseudomembrane, i.e., yellowish-gray in color. The symmetric ulcers are found in both the RAS and viral disease, the difference lies in the presence of tissue tags in the ulcers of viral origin including erythema multiforme, pemphigus and pemphigoid. Also, RAS ulcers develop on the non-keratinized mucosa especially buccal and labial mucosa while the viral ulcers are commonly found on the keratinized mucosa of the oral cavity.

An accurate detailed patient’s history and clinical examination is the basis of diagnosing a case of RAS. The following points should always be kept in mind by the practitioner while taking history of patient suffering from ulcers-

The clinical assessment includes inspection and palpation, which complements each other. The ulcer base may be necrotic, granular purulent or covered with mucus. The palpation of the ulcer reveals the consistency of the base (soft, firm, or hard) of the ulcer and it’s fixation to the underlying structures. The tissue surrounding the ulcer may be white, speckled, erythematous or normal in appearance. The investigations to be undertaken include percentage haemoglobin and complete blood count, erythrocyte sedimentation rate/C-reactive protein, serum B12, serum/red cell folate, anti-gliadin, and anti-endomysial autoantibodies.

The cyclic nature of the disease and unknown aetiologic factors make recurrent aphthous stomatitis a difficult disease to treat with non-specific therapy. The treatment of RAS depends on the size, site, frequency and number of ulcers in the oral cavity. Topical therapy includes benzocaine used alone or mixed with a protective emollient such as Zilactin or Orabase is helpful in case of occasional episodes of minor aphthae. Other topical agents include diclofenac or amlexanox paste helps in decreasing the healing time of ulcer.

A more frequent or severe disease requires a topical glucocorticoid therapy, where patients should be guided for a proper use of high potency steroids. Intralesional steroids are preferred for slow healing lesions of major aphthae, which helps in decreasing the healing time. Topical antibiotic therapy is suggested for RAS since a long time. Tetracycline mouth rinses helps decreasing both the healing time and the pain associated with the lesion. Though topical therapy helps in managing RAS but many a times it is not sufficient to treat large aphthae or frequently appearing multiple, minor aphthae. Systemic therapy is helpful for this group of patients.

Systemic corticosteroids including prednisone help in the management of severe episodes of major RAS. Other medications such as pentoxifylline (PTX), colchicines, and thalidomide are suggested to be potentially effective in the treatment of RAS. Thalidomide proves to be an effective drug in the treatment of HIV-associated major aphthous ulcer. Clinicians prescribing thalidomide must be registered in the System for Thalidomide Education and Prescribing Safety (STEPS) program in order to minimize the risk of birth defects. This program help in educating the physicians and dentists on the proper use of drug, provides counselling for patients, and closely monitor the thalidomide use. For example, the program mandates that women in childbearing years must use two forms of birth control and have a monthly pregnancy test.

Some of the other drugs which are helpful in managing RAS include systemic zinc sulphate, monoamine-oxidase inhibitors, sodium cromoglycate, deglycirrhizinated liquorice, sucralfate, etretinate, low energy laser and many others. Still, studies are required in the drug therapy to provide more effective treatment for RAS.

In the absence of accurate aetiology, trigger factors and genetic predisposition of disease, there remains no safe therapy to confirm for non-recurrence of RAS. Despite of being a common, painful, recurring disorder, a lot is required to understand and manage RAS.

dental considerations of a pregnant woman 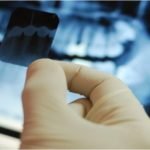