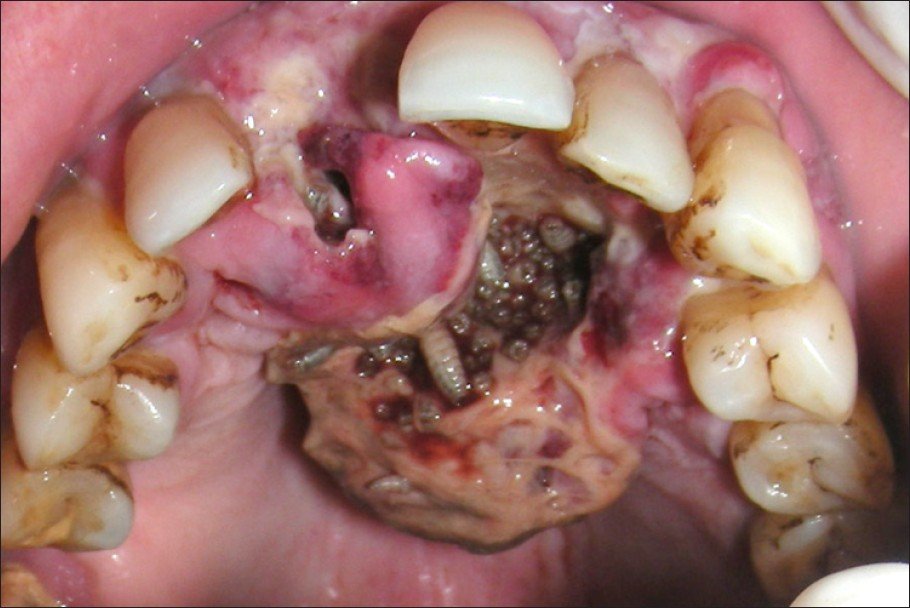 The term myiasis is derived from the Greek work “myia”, which means invasion of vital structures of vertebrates by fly larvae. Reverend F.W.Hope, in 1940 coined the term “myiasis”. According to Zumpt, myiasis can be defined as “an infestation of live human and vertebrate animals by dipterous larva, which at least for certain period of its lifecycle feeds on host’s dead or living tissue, liquid body secretions, and fluids or ingested food”. Myiasis is a rare condition, commonly found in tropical and subtropical climatic regions. As oral tissues per se are not exposed to external environment, the incidence of oral myiasis are less than that of the cutaneous myiasis. The predisposing condition for oral myiasis arises from where the oral cavity has a prolonged exposure to external environment as in mouth breathing, anterior open bite, incompetent lips, cerebral palsy, following tooth extractions, neglected mandibular fractures, patients undergoing mechanical ventilation, local pathologic conditions such as cancrum oris and malignancies.
Myiasis can be defined as the invasion of organs and tissues of humans or other vertebrate animals with dipterous larvae, which for at least a period feed upon the living or dead tissues or, in the case of intestinal myiasis, on the host ingested food. Different terms are used to describe myiasis which affects different parts of the body. For example, cutaneous, dermal or subdermal myiasis, urogenital myiasis, ocular myiasis, nasopharyngeal myiasis.
Myiasis frequently occurs in rural areas infecting livestock and pets such as dogs and cats. In humans, myiasis prevails in unhealthy individuals frequently found in third world countries. Diabetes and peripheral vascular diseases can be predisposing factors for myiasis. Myiasis occurs in the patients with poor oral hygiene, ill fitting, uncleaned prosthesis, advanced periodontal disease, at tooth extraction sites, thumb sucking habits, seizures and incompetent lips. Alcoholism, senility, mental retardation, hemiplegia and mouth breathing during sleep may facilitate the development of oral myiasis. Myiasis of oral cavity is usually caused by flues of the order Diptera. They normally develop in decaying tissues. Necrotic tissue present in the exposed wounds are the favored sites for the growth of dipteral larvae. Prevention of human myiasis involves control of fly population and general cleanliness such as reducing decomposition odors, cleaning and covering wounds. Occlusion or suffocation approach is used to extract the larvae. The only antibiotic that is effective against maggots through intravenous or oral use is ivermectin, which blocks nerve impulses on the nerve ending through the release of gamma amino butyric acid (GABA), linking to the receptors causing palsy and death.
Following are some of the images showing a case of dipteran larvae in the exposed wound on the lower lip and the palate. The larvae were extracted using tweezers after they were forced to move out using the turpentine oil. The patient was admitted in the hospital and was kept on i.v. fluids along with Inj Amoxicillin (1000 mg) with Potassium clavulanate(200mg), tab ivermectin (6 mg) with albendazole (400 mg), tab Ketorolac (dispersible tablets), Inj Ranitidine, Inj Metronidazole. The effectiveness of the treatment plan can be assessed by examining the improving health of the patient. Further management included surgical removal of necrotic areas, oral prophylaxis along with warm saline rinses and chlorhexidine mouthwash.

Prevention is better than cure. The progression of the disease can be controlled by controlling the growth of mosquitoes, maintain the good oral and personal hygiene such as reducing the decomposition odor, cleaning and covering the wounds and by educating the susceptible population where basic sanitation is meagre. Medically compromised patients need special care needs to maintain their basic oral hygiene.

Is Glucosamine helpful in managing TMJ-Osteoarthritis??? 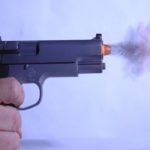 Does Humanity has any answers to gunshot violence??