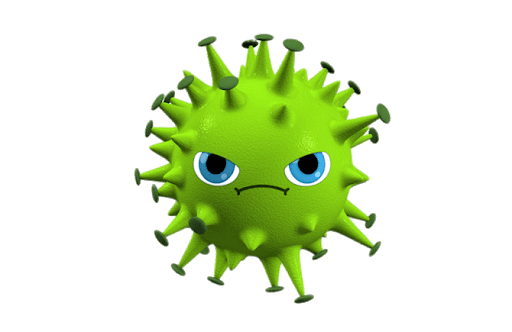 One health concept as summarized by the World Organization of Animal Health (French: OIE) is that the human and animal health are interdependent and bound to the health of the ecosystems in which they exist. Though his treatise on Airs, Waters and Places in Circa 400 BC, Hippocrates had urged the physicians that all the aspects of patients’ lives including their environment needed to be considered as disease is the result of imbalance between man and environment. As human population grow, it leads to greater contact with domestic and wild animals, providing more opportunities for diseases. Some of the biggest epidemics that affected human life include
1. Plague of Justinian, Byzantine Empire [541-542 AD]: records the highest number of lives lost in any epidemic so far with about 100 million dead, which was half the world’s population
2. Black plague, Europe [1346-1350]: killed about 60% of continent’s population
3. HIV/AIDS: began in 1960 but world became aware of it only in 1980s. Medicines became available only in 1987. Today, there are about 37 million living with this disease worldwide
4. Flu [1918]: killed around 20 million people
5. Modern plague [1894-1903]- 10 million died during the epidemic
6. Asian flu [1957-58]- 2 million people were dead due to the disease
7. Sixth cholera [1889-1890]- 1 million died
8. Russian flu [1889-1890]- about 1 million people had died due to the epidemic
9. Hong Kong flu [1968-1969]- I million people died
10. Fifth cholera pandemic [1881-1896]- 981,899 people died due to the disease
The recent outbreak of novel coronavirus disease 2019 (COVID 19) in the Wuhan city of China rapidly evolved into a public health crisis and exponentially spread to other parts of the world.
When does the World Health Organisation declare a disease to be pandemic?
Pandemic (Greek: Pan- all; demos- people) indicates a disease that is spreading in multiple countries and continents at the same time. But, it refers only to spread of the disease and not its potency of deadliness. On the other hand, epidemic is any medical problem that has grown out of control. The difference between an epidemic and pandemic is given in table 1. 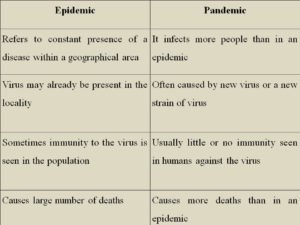 Phases of pandemic:
Any disease undergoes different phases before becoming a pandemic. WHO has devised six phases for a disease to become a pandemic.
Phase 1: viruses are circulating only within animals. No evidence of human infection from animal virus
Phase 2: infection in human being is caused by an animal virus. The virus strain has mutated to make the transfer to humans. Hence, basic level of threat arises.
Phase 3: small clusters of human beings have contracted the virus in one community. If the outsiders come into contact with such clusters then there is potential for spread of virus.
Phase 4: human-to-human and animal-to-human virus transmission is evident. More number of communities report outbreaks and pandemic is more likely but not a foregone conclusion
Phase 5: it exists when human-to-human transmission takes place in at least two countries in one WHO region. Most of the countries are yet not affected but pandemic is considered imminent. This phase is a signal for the governments, health officials and others to be ready to implement pandemic mitigation plans
Phase 6: global pandemic is underway and the illness is widespread. Governments help populations deal with pandemic using preventive and stop-gap measures
Post pandemic phase: after an initial increase, disease-spreading activity begins to wane. Now, the key is to be prepared to try to prevent a second wave. 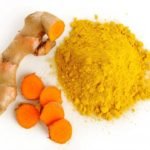 The Magic of the Indian golden spice 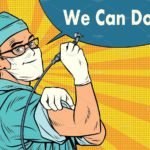 Has coronavirus comes with major challenge for the dentists????